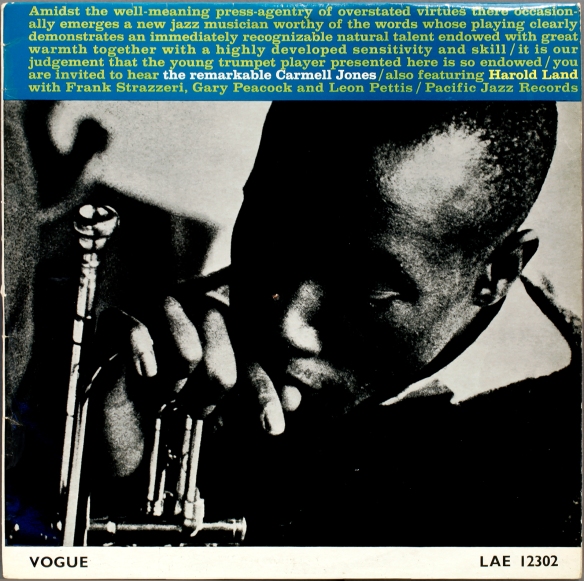 Jones was born and educated in Kansas, studied trumpet, and moved to work in Hollywood recording studios. He went on to tour with Horace Silver, and his  best known appearance is on Silver’s signature “Song for my Father” in 1965.

Another US jazz émigré, he moved at the height of his career to Germany for 15 years, working on the German jazz scene – Radio Free Berlin –  playing at International Festivals with the likes of Pony Poindexter, Oliver Nelson and suprisingly, Jean Luc Ponty. He returned to the US in 1980, however by then the music scene had moved on and he retreated into obscurity, his initial promise never realised.

Critics described Carmell as one of the finest trumpeters on the early 60s West Coast scene,  a disciple of Clifford Brown. “Like Brownie, Jones had a sweetly powerful sound and dazzling technique that never interfered with his creativity, musical responsibility or his humility”

A good bop outing to which Land adds his customary piquancy on tenor. A young Gary Peacock’s presence adds a particular note of interest. An acoustic bass player of outstanding career longevity, Peacock has appearing most recently on the stage of the London Jazz Festival 2011 with Keith Jarrett  and Jack DeJohnette, still going strong.

Released originally on the US West Coast Pacific Jazz label rarely seen in the UK, found here on UK Vogue. Commonplace as a reissue in the 1980’s on Affinity/ Charley Records, the original Vogue release is characteristically heavy vinyl early Sixties pressing  by Decca, with the 1B Matrix indicating original UK first pressing, sound to match. 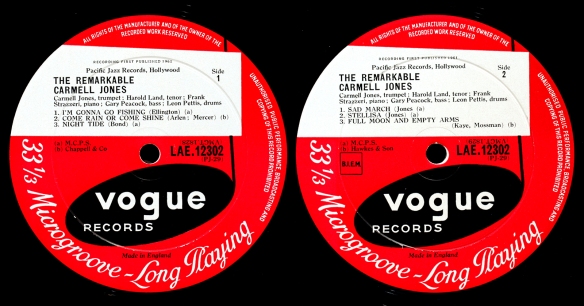 Came across this in a London store and was attracted to the Harold Land presence and the fact I like original UK pressings from the fifties and sixties, and the fact I hadn’t seen any records I fancied all day.  I probably paid a bit too much for it, but sometimes you do. It makes up for all the bargains for which you pay to little.