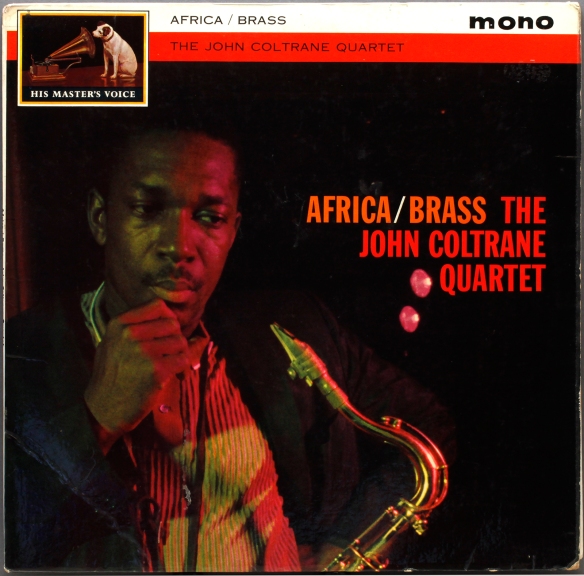 Coltrane’s first record for Impulse, and a monster of a record it is, fizzling with energy and new ideas, richly textured with brass arranged and conducted by Eric Dolphy, Elvin Jones powering the whole thing like a runaway train, and Coltrane setting out his new direction.

Africa occupies the whole of one side, two other tracks on side two, and they all engage you the whole way through. I was tempted to rip Africa in its entirety but  that’s for you to go get.

On a more serious note, I am required to eat a large serving of humble pie. First I though Africa/ Brass was one of Coltrane’s later, spiritual recordings. Wrong, its 1961. Second I thought I didn’t like his Impulse period. I bought it without knowing it was an Impulse. What a dummy. It’s an HMV first UK issue of Impulse

So by accident, for all wrong reasons, I got a great record. I also learned more things in the process. Mainly its good to always try something new. Even if it doesn’t always work out, the next choice might, so mistakes are good. Second, an unknown and ever-changing proportion of what you think is almost certainly wrong.

Another slice? Don’t mind if I do.

Nipper on dark red label, mono, heavy vinyl, gold type that is hard to read. Looks very traditional, like you might find on classical records. Not at all “Coltrane Africa/ Brass” Great laminated cover though.

Interesting, this is a pressing by EMI. The matrix is the Impulse catalogue number, and machine stamped. It looks similar to Decca, but Decca letters are engraved in a straight line. EMI’s follow the curve of the record. Could be useful to know.

The US Impulse run-out indicates Van Gelder mastering, while the UK press is a local mastering from copy tapes sent over, so it may be sonically different. But EMI engineers knew their stuff. The Beatles, anyone? 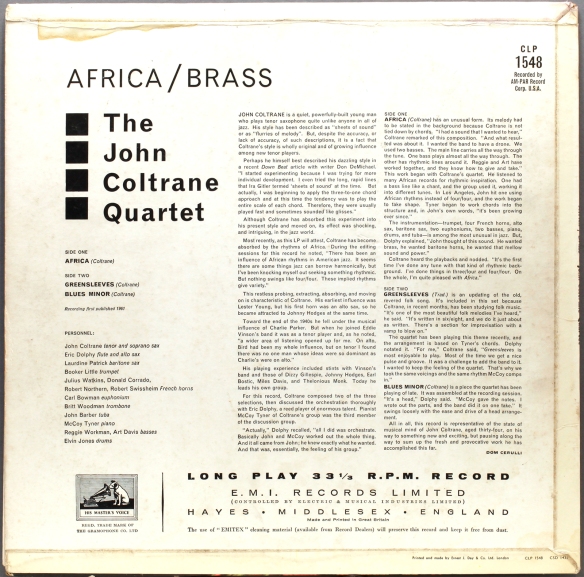 I don’t think I have seen the UK original before. An autographed Impulse was auctioned recently on eBay by Sister Ray in Soho – the guys behind the counter showed it to me, so I have seen but not got an autographed copy It sold for £358. Mine cost me £27 after haggling- “This record is worthless. Is not autographed. I want discount“, so I don’t feel so bad about missing the autograph.