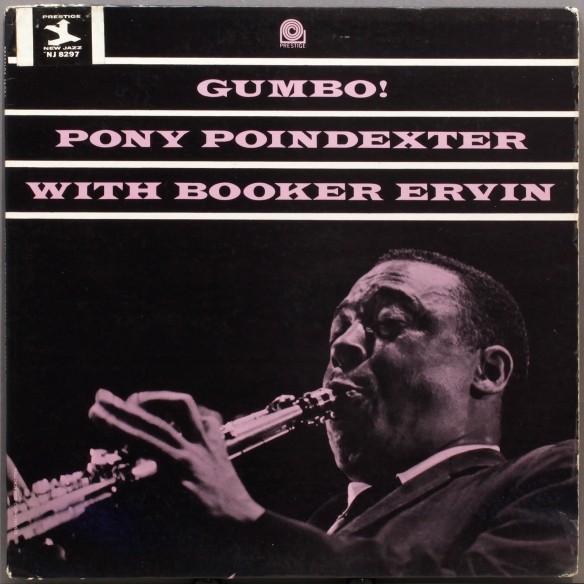 Poindexter Pocket Bio: Brought up in New Orleans, Norwood (“Pony”) Poindexter revisits his roots in this recording peppered with references Louisiana’ distinctive Cajun and Creole culture,  originating from its unique  Spanish, French and West African cultural heritage. As with many saxophonists, the clarinet was his first instrument before switching to alto and tenor. Poindexter spent much of the Fifties working in big bands, including a spell with Stan Kenton, Billy Eckstine and Lionel Hampton .He was one of the first bebop saxophonists to play soprano saxophone early in the 1960s, joined a few years later by  one John Coltrane.

I first came across Poindexter on the excellent “Alto Summit” with Leo Wright,  Phil Woods and  Lee Konitz (released on MPS) His best known recording remains “Pony Express”, famed for the dazzling array of big name musicians – one I only ever see as a reissue .

In 1963 along with many other American jazz musicians Poindexter moved to Paris; where recorded with other expatriates Phil Woods, Lee Konitz and Leo Wright.  He later moved to Spain and then to Mannheim, Germany, and after some years, returned to San Francisco, languishing in relative obscurity until his death in 1988.

A rare 1963 Prestige album with Poindexter leading a creative combination with  Booker Ervin, who  plays more straight-ahead than on his exploratory “Book” sessions. His distinctive Coltrane-like biting tone contrasts well with Poindexter’s bluesy soprano dancing in the upper registers.  The rhythm section provides a solid foundation without holding back Poindexter’s jaunty compositions, which happily fuse  latin / creole influences with jazz stylings. An overlooked gem! (Pause, forest of hands go up at the back of the class)

“Please Sir, we all have the Evil Silver Disc,Sir, with bonus tracks, Sir.

Class dismissed – err, not you lot at the back, remain seated. You are all in detention, starting now, each write 100 lines, “Bonus tracks are the work of the Devil”.

Slated originally for release on the New Jazz label, for some unknown reason it was never issued and appeared for the first time on the  Prestige 16000 series, the first of only eight  titles in that series..

Fortunately there were several dozen copies of this rare title in the shop, covering all permutations of condition between mint and fair, in both mono and stereo, at a range of prices to suit all pockets. Err no, you didn’t believe that did you. There was just the one, I’ve never seen it before or since, and the condition is what it is, take it or leave it.

Though the vinyl condition less than perfect, the music remains well on top and the new TKR cartridge is making considerable strides in de-emphasising faults. Its’ stylus is line contact, a fiendishly expensive micro-engineering design that digs  deeper down into the groove than a conventional and a hundred times cheaper stylus. (Typically, that used in making these rips)  The vinyl wall towards the bottom of the groove is all-but impervious to surface damage above, giving the stylus superior contact with the profile originally left by the cutting lathe, de-emphasising any later groove-wear, and scratches, which are often consigned to a mere passing tick  which though audible, does not interrupt the flow of the music, which clings to your attention like a limpet.

And you thought it was about poncy audiophile jewellery.