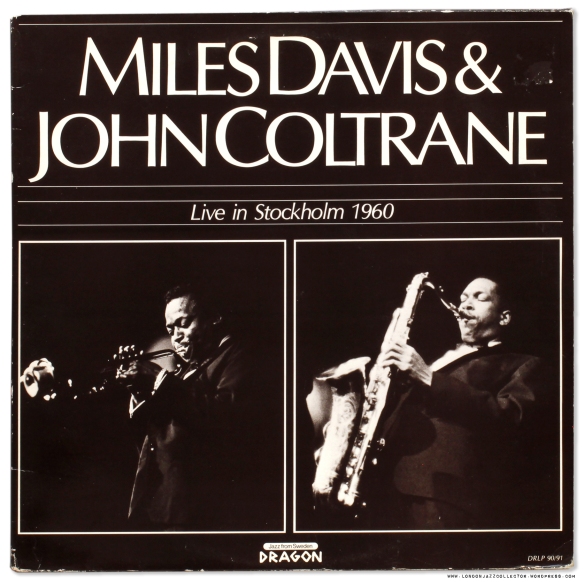 1960: US Polaris missiles pointed at Moscow deployed off the coast of Sweden backed by US guarantee of military support. Russia decides Sweden too cold and depressing to invade, decides to attack somewhere warmer instead. Settles on Cuba.

A year after recording Kind of Blue, The Miles Davis 1960 European Tour, with Coltrane  reputedly bored with the repetition of Davis songs, already planning his departure to explore his own music, he blurts it all out to Swedish Radio, Miles Davis fired on air.

Far from sounding like someone bored with the repertoire, Coltrane is masterfully explorative, as though, in his mind,  he was already in rehearsal with his new band, The John Coltrane Quartet, guest appearance Miles Davis. At fifteen to twenty minutes a track, in a live setting, both he and Miles have ample space of their own. You can sense Coltrane reaching out to find his own voice, not just filing a routine  set of quickfire changes, but slow considered notes, giant steps, searching out new harmonic possibilities, building tension to the point when you begin to crave some blistering 32 notes per second release.  Give me angry John! You know you want to!

Critics have  mused on the remarkable chemistry of the great Quintet. In his personal life Davis was outgoing, intense, even violent, though his musical persona was cool and muted. Coltrane was similarly inverted, modest and humble in real life, while his playing was intense, violent, described by critics as “angry.”  Oops, LJC, don’t mention critics again, they will be all over you again like a cheap suit.

Wynton Kelly’s rolling piano moulds the magnificently tight rhythm section, three as one taking care of business so the two star performers can dance on air. No hint of approaching instrumental democracy, “we are all soloists now”. The hell we are, we are The Rhythm Section, and We Swing. 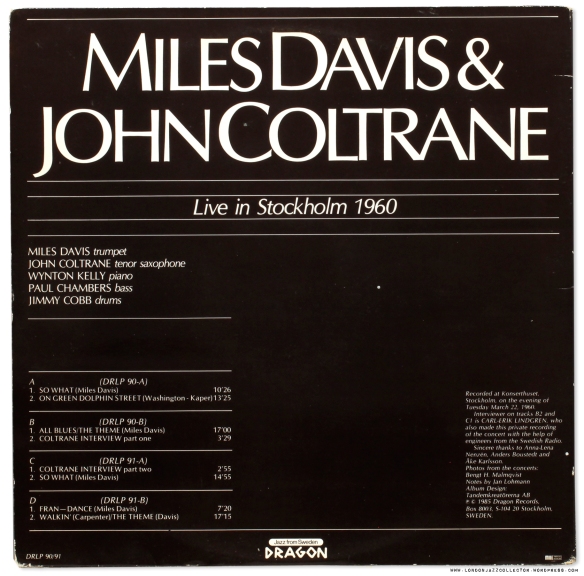 Source: West-central London record shop, located off the periphery of the magnificent Hyde Park and the Serpentine lake. I often take advantage of the hour walk from here through the park back to my London train terminus. Several herons were out on display, posing on one leg in front of a giant twenty foot high Henry Moore sculpture, through which distant backdrop is Kensington Palace. The querulous and squabbling ducks on the giant lake are nesting at the moment, awaiting the imminent arrival of broods of fluff. Set in the sweeping grassy vista, sculpted beds planted out colourful blooms. Spring has sprung, my shoulder bag heavy with four new additions to  the Vinyl Family, spring in my step. Its a great time to be the London Jazz Collector.

23 thoughts on “Davis and Coltrane Live in Stockholm (1960) Dragon”