A superb outing in which Rollins plays with other fine musicians rather than just as the prime soloist being supported by a piano-less rhythm section. Some like their Rollins spare, and there are many recordings which satisfy that preference. This first Blue Note outing for Rollins is very much ensemble playing, tunes with strong headline statements and tuneful bop structure rather than tongue-in-cheek launch-pads for woodshedding. Rollins shares the horn register with Byrd; the calibre of Max Roach and Wynton Kelly deserve to be heard, and all the better together, with greater tonal richness and swing.

I have no difficulty in confessing this is my favourite Rollins, which is why I have five different pressings, and made it part of my search for the elusive best audiophile experience, in this world, and the next.

Music Matters are to be commended for getting the cover the right way up, any less would be unthinkable. Cue Frank Sinatra, I Did It Side Ways:

Original Blue Note, upright (left); Liberty Records (centre) and King Records Japan (right) give priority to the direction of the text, with Sonny laying on his side – a conscious or mistaken decision to alter Reid’s original design for these reissues. Popsike does show a number of original 47W63rd second pressings with the cover photographed some upright some sideways. Were there two covers? Does it matter?

Note: very faint but there is a Plastylite ear symbol at 5 o’clock Side 1, 10 o’clock Side 2
That is what I call a sense of humour! Nice touch.

MM Packaging: beautiful high gloss gatefold package with previously unseen (by me)original photos, superbly rendered in black and white, really, you could not create a more attractive modern package, hats off to MM.

Oddly, the address at the foot of the cover is not 767 Lexington Avenue like the labels.

First, other reissues. As owner of both a Division of Liberty and Division of United Artists reissues of 1542, in my opinion these are very poor transfers. 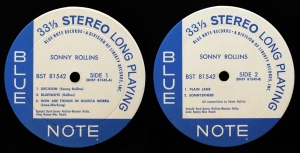 The Div UA was a particular disappointment, as these were often well re-mastered by UA in-house engineers, but in this case it is a dog, unusually with identical run-off etchings to the Division of Liberty reissue, indicating the same source metalwork.

The King 1542 also does not in my view do justice to the recording, leaving the French Pathe Marconi ahead as the best of the re-issues.

At this stage then,  its between the Original and the Music Matters: one fall, submission or a knockout, let battle commence.

Music Matters: a lot of people have let me know they prefer Music Matters editions over Blue Note originals. (Actually, what they usually say is “they are better”). The stakes are high. If  MMs offer a more satisfying and authentic presentation of the great original Blue Note recordings – including those impossibly expensive classic 1500 series – then there is little point in an audiophile chasing hundreds of holy grail original Blue Note editions. With MMs at only $50 a title, save your cash, invest in MMs, and put your current Blue Note collection up for sale, retire on the proceeds to Florida.

Put to one side the case of trophy-hunters who lust for first pressings. Blue Note originals are a fantastic rare collectible artefact in their own right, and a later copy is always just a copy, however perfect. Music-lovers, a.k.a. normal people, will be happy to have The Evil Silver Disk newly remastered in 24-bit, for just a few pesos . The question for the poor tortured vinyl audiophile is this: have the dedicated engineers at Music Matters, with access to original tapes, and 45 rpm modern mastering and pressing technology, succeeded in producing sound equal to or even better-than Blue Note fifty year old originals? There is only one test in music that matters – listen for yourself. Nullius in verba,  ‘take nobody’s word for it’.

Last month I ordered two Music Matters editions direct from Music Matters in the US, brand new and sealed, from their current catalogue, including Rollins Blue Note 1542. Despatch was quick, service perfect.

Listening on the high-end system to the MM and my second pressing original,  the difference I could hear was significant. I created rips for each edition, MP3 at 160kbps on my “low-end” Numark USB DJ Turntable, each at the same settings apart from speed. Playing back the MP3s through the PC’s Dell Soundbar, the self-same difference was evident, albeit both at overall lower quality.

A comparison, I think, in which the differences are inherent in the sources, and not dependent on the playback equipment.

Original BLP 1542 Blue Note: Decisions , 2nd press 47W63rd Note: my vinyl copy has  a few scratches and clicks that slightly affect play, VG only, but its the sound quality to listen for.

You can start and stop each, flick between the two to hear how they interpret the same segment, take your time, no need to walk two and fro the turntable.

Now have your say!

There is no right answer in this poll. If A sounds better to you than B, that is your preference, if you prefer B, it’s valid for you. No one truly knows what anyone else hears.  I don’t need to persuade you one is better than the other, you can decide that for yourself. I have decided my own preference. If I am the only one on the planet with that opinion, it remains resolutely my opinion. I share my own assessment after the poll, but I recommend you vote first, on the basis of what you have heard.

Judge Jazz says: The  total MM package is beautiful, you couldn’t wish for a better looking product. It is great value for what you get, and sound better than most other reissues I have ever heard. However, in my opinion, despite the overwhelming hype, the Rollins MM falls short of the original Blue Note in the audiophile department.

My immediate reaction to the MM was its lack of immediacy and presence, too laid back for my taste, compared with the original vinyl. MM quote the HiFi Plus review (Issue 71), which makes great play of how the MM is superior to the CD reissue. I am sure it is, it’s not difficult to trounce a CD, but that is not what I was comparing.  The MM is restrained and muddy where the vinyl original sparkles, and the all-important top end is, to my ear, shy,  the instruments failed to form a cohesive group. I found myself listening critically to the hi fi instead of being seduced by the music. My reaction was not what the hype had led me to expect.

The original Blue Note is brighter, more dry-sounding , fresh and natural to my ear, more musical, more punch at every point. The individual instruments sound more authentic – Rollins tenor particularly. His joyous stutter-riff of the tune Decisions makes me laugh out loud as I listened, putting a broad smile on my face.The instruments integrated, and as a result you can follow the flow of the music better. The difference between them is not small.

I have heard it said that MMs sound “more like what Rudy Van Gelder would have created if he had the same equipment today”. It’s an interesting line of argument, great marketing, but one that doesn’t carry any weight with me, as  I prefer what RVG created originally.

The Rollins MM seem to have much the same audio character as my previous Hoffman Acoustech 2x45rpm from  Analogue Productions, Grant Green’s Idle Moments. That was flabby and lacking punch, as well as having some nasty crackles despite being factory-fresh. The MM packaging was much nicer than the AP, but the audio sounds from the same family. On a sample of two, both the Rollins and the Green fall short of my benchmark Blue Note originals. The third, Hubbard’s Open Sesame (MM),  is of the same character.

On each spin I enjoyed the Blue Note original more and would choose to play them every time in preference to the Music Matters edition, despite its’ surface imperfections.

The down side of Blue Note originals remain significant – the grief of the chase, the expense, the disappointments, the surface defects clicks and tics. Does original vintage vinyl offers the best audiophile experience? On the basis of this direct comparison, the answer for me is yes, vintage rules. But at the end of the day, your opinion is the only one that matters, it’s your money, you choose what sounds best to you. Appeals to authority (I’ve listened to millions of Blue Notes and I say...) don’t count for anything to me. You listen, you decide. I have no problem with you arriving at a different conclusion.

Caveat: This test is on two copies of one recording. It doesn’t mean there are other titles or combinations where the comparison result  could be different . This was a mono to mono comparison. Many MMs are stereo, they may compare quite differently to Blue Note Stereo, I make no claim to judge.  A lot depends how good the copy your “original” Blue Note is: some original copies are better than others: original is not a guarantee of audio quality.

New rip for the MM timed to sync with a CD at 7:58 + 2 secs lead-in. The Numark USB TT has a slight right channel bias, perhaps it’s been watching too much Fox News, but unfortunately no adjustment possible. Interesting because Numark let you adjust the pitch, which is good because the factory defaults are out by a couple of percent, but not the balance, which is also off.