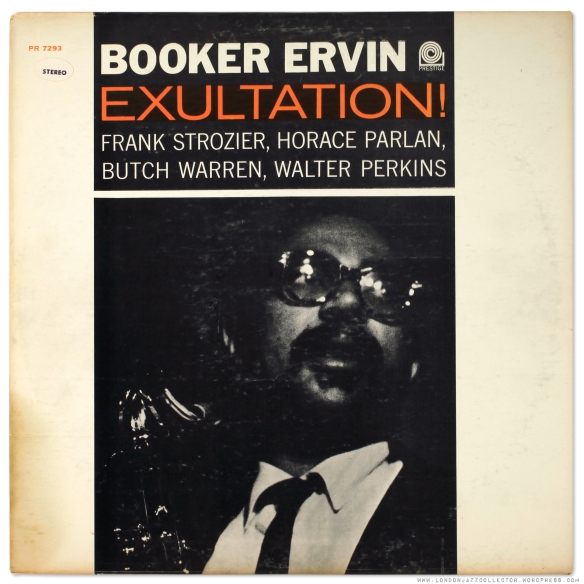 Following the familiar path of military service, then college music education, the young Texan Booker Ervin cut his music teeth playing rhythm and blues, teaching himself tenor. Moving east, a chance encounter with Horace Parlan opened up an audition opportunity with Mingus, where he quickly found a place in the creative cauldron which launched so many fine players in the late ’50s and early ’60s. Able to navigate Mingus complex scores, Ervin also shone in solo, paired with Dolphy’s wild alto excursions.  His hard-driving tenor is heard on all Mingus’s key albums of this period including Ah Um, Blues and Roots, At Antibes, and Mingus Five.

Exultation! is a fairly early title with Ervin as leader, recorded not long after That’s It! – an album for the short-lived Candid label. Soon after he went on to record the Book series for Prestige: Freedom Book, Song Book, Blues Book, and Space Book, each with its own rotating cast of players. Extra tunes from the Blues Book sessions appear on Groovin’ High.  Not one to run out of ideas, these titles saw him stretching out more and more.

Many of Ervin’s album titles include the streetwise apostrophe in place of “g” or end in a shriek mark so you know what to expect: excitement! A long run of albums  through the ’60s went on to include recordings for Blue Note and Pacific Jazz, but came to a dead halt in 1970, when The Book closed, unexpectedly early, at the age of only 39.

Booker Ervin’s discography spans Columbia, Atlantic, Prestige, Impulse, Blue Note, and Pacific Jazz, ensuring that most all of his recorded work benefits from top class recording, and many by Van Gelder.

Just when you think you have enough shriek-mark titled albums, along comes another!

The liner notes to his first album as leader, Cookin’, for Savoy (1960), introduced Booker Ervin thus:

Ervin plays tenor with a wild sweetness, with dizzying velocity, and an angular modernity which is not devoid of personal warmth, beauty, and humor….a rising jazz star, who has paid 11 years of “dues” to bring to you his message.

No-one quite sounds like The Book, you could pick him out within seconds of a blind listening test. Stylistically probably closer to Coltrane than any other major tenor figure, Ervin’s biting urgent tone drives all before it. His distinctive voice combines runs at  relentless speed with a faltering vibrato, punctuated with a characteristic wail.  He cooks, and cooks with passion and at length.

His partner in brass here is the more bluesy Frank Strozier on alto, which pushes Ervin further “out”, not to occupy the same space. Parlan commands a seat in the front row too, and the quintet fires on all five cylinders.

A number of excellent Parlan/Ervin sessions turn up under Booker’s name in the Blue Note  “Back from The Gig” two-fer (essential listening), but not those featured here, which may explain why Exultation! seems a harder album to find.  Blue/silver trident pressings generally always sound bright and punchy, especially those recorded by Van Gelder,  at Englewood Cliffs, prime Blue Note territory. 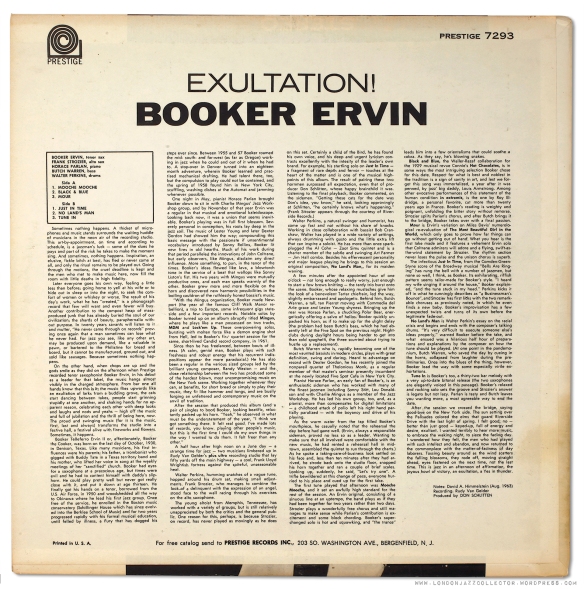 Exultation! has been a gap in my Booker collection for a long time. It  rarely seemed to turn up, and eluded me when it did. When it finally showed up the other week on an Ebay Buy-it-Now offer, via an email notification from my searches, no time was wasted, it was bought now (if not sooner). It was one of half-dozen Booker Prestige titles on offer, clearly a collection of a fan, and the one I was missing was in there among them. At last!

Buy-it-Now differs from auctions where sellers sit back and let the market decide value. I imagine the vinyl sales staffers toiling away all day, researching the original status of the pressings,  grading the vinyl, writing up the descriptions, and then nail-biting decision time, to setting the offer price for each title. So much for this one (consults Goldmine) so much for that one (consults Popsike) and so much for the final one (consult Discogs), hoping they have got it about right (then adding a bit for luck).

It must happen the way you see it Hollywood movie scenes. Darkened room, blue-lit, with bank of computer screens, lots men in white shirts sit punching away at keyboards, some talking into microphones. People hurry back and forth, armed with sheaves of papers. The Chief on the bridge, overlooking, nurses his ulcer, worrying about budgets. 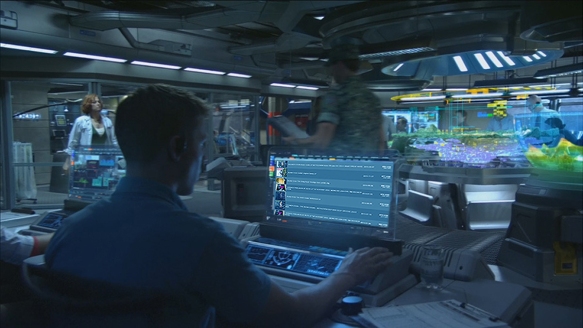 “Zoot, may be you undercooked the price…”

Booker Ervin may be judged as under-rated or under-appreciated by some, but not here and LJC Towers, and not I suspect by many out there. As for his first title, Cookin’ on Savoy…or the Bethlehem, I don’t think I’ve seen a copy of that before. Who knows, one might turn up, any time.