Not everything is as it seems.  A post on sketchy identities, confusion, possibly even deception. It introduces a relatively unknown British jazz artist named Scott. Not Tony, not Ronnie, but…Johnny. And even that’s not his real name. Follow the twists and turns in another  jazz mystery tour.

Buckle up and hold tight! 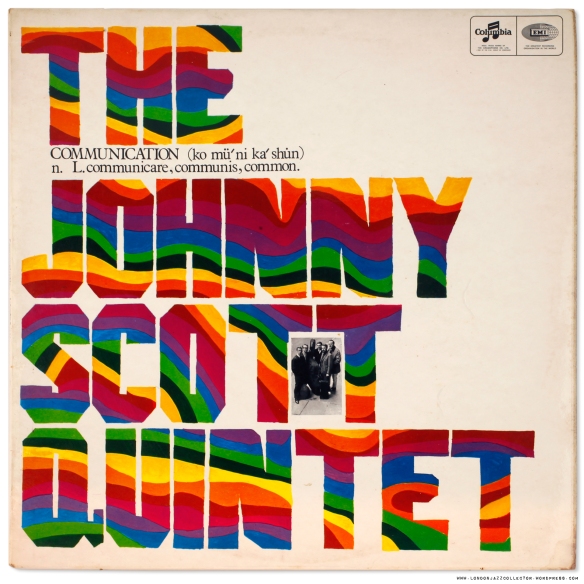 Johnny Scott, flute; Barry Morgan, drums ; David Snell, harp; Duncan Lamont, saxophone;  recorded probably at Lansdowne Studios, Holland Park, or some other studios, somewhere in London, by someone not mentioned in the credits.

Johnny Scott led a jazz quintet, quartet and trio during the 1960s, but he was better known as a composer of music for TV and film, from the ’60s throught to the present day.  He has  hundreds  of soundtracks to his credit  including a good number of schlock-horror movies as well as big motion pictures, such as Anthony and Cleopatra (1972) starring Charlton Heston, real name, John Carter. Among Scott’s many film scores was one for the 1920 silent movie, Dr Jekyll and Mister Hyde, one man with two identities.

Faced by four red flags: “British Jazz”, “flute”, “harp”, and songs from “Hollywood musicals”, I still don’t know why I went for this album. Probably just contrariness, challenge your assumptions. Without going the full Harry Potter, it revealed, unexpectedly, a box of treasures.

Among the diverse tracks, harpist David Snell’s composition Mode Moderne really grabbed me. It bore a  remarkable similarity to a song by the iconic Irish singer Van Morrison. Long-suffering Mrs LJC walked into the music room while it was playing and spontaneously burst into… Moondance, a favourite of hers. ♪♫♪”Well, it’s a marvellous night for a moondance, With the stars up above in your eyes…dadadidahda, dadadidada…”♪♫♪  Amazing how recollection of actual song  lyrics falls off after the first two lines, lots of animated movements, followed by repetition of the first two lines…it’s a marvelous night for a m…

Here is the Van Morrison Official Site for Moondance – judge for yourself:

Snell’s tune is instrumental, whilst Van Morrison’s has words, so they are different that way. Wiki picks up the Van Morrison side of the story.  Wiki says of Moondance:

” “Moondance” was written and developed while Morrison was living in Cambridge, Massachusetts. He has commented, “With ‘Moondance’ I wrote the melody first. I played the melody on a soprano sax and I knew I had a song so I wrote lyrics to go with the melody. That’s the way I wrote that one…

The guitar player in his band at that time, John Sheldon, remembers that during the summer of 1968, at a rehearsal, the band was fooling around with a Broadway tune called “Lazy Afternoon” released in 1967 in a jazz version by Grant Green. Morrison requested some changes and began singing a melody that would eventually become “Moondance.””

Interesting how shaky knowledge is revealed, when you know something about a subject personally – a warning to anyone who believes anything written in newspapers.

For a start, Lazy Afternoon bears little or no resemblance to Moondance, as every Blue Note collector knows. The original Lazy Afternoon tune was a composition credited to Jerome Moross and John Latouche, first released in 1954:  Marlene Dietrich ‎– At The Cafe De Paris,  (Columbia Masterworks ML 4975}. (“Marlene” is a  contraction of her true names, Marie Magdalene Dietrich)

Grant Green first put Lazy Afternoon to disc on Street of Dreams (BLP 4253) which was released by Liberty in 1967. However,  a working knowledge of the allocation of Blue Note catalogue numbers should have immediately raised a red flag to John Sheldon over the alleged “1967” date of 4253. BLP 4253 was in fact recorded three years previously, in 1964, released deferred by Blue Note and expedited by Liberty Records in its second year as Blue Note catalogue owner in 1967. Two years before Liberty released the Grant Green recording, drummer Pete LaRoca put Lazy Afternoon on his debut LP  Basra (BLP 4205), recorded in 1965 with Joe Henderson/ Steve Swallow/ Steve Kuhn.

None of which helps to explain how Van Morrison allegedly came to write Moondance in Cambridge, Massachusetts somewhere around 1968-9, when David Snell’s Mode Moderne was written, recorded and published  a continent away by the Johnny Scott Quintet,  a year before, in 1967. It’s a mystery (scratches head, nostrils quiver).

Reflecting on the lyrics, I suspect a “moon-dance” has nothing to do with astronomy or dancing. More likely it is a thinly-veiled sexual innuendo, but who knows, anything goes in the world of pop.

UK pressing of Columbia Magic Notes issue by EMI, Hayes, Middlesex. Social Justice Alert!  Middlesex has no trans-gender overtones. It is merely a UK postal address county which has long since ceased to exist except on letterheads and old record jackets.

Columbia Magic Notes showcases a number of magical recording of British Jazz in the latter half of the ’60s, when British jazz veered sharply away from impersonating American Jazz.  Columbia had licensed use of the Columbia “Magic Notes” trademark in the UK to EMI, as seen on the label below. Despite the word Columbia on the label, is not a Columbia record. To get around its own EMI licensing problem, Columbia actually released Columbia recordings in the UK on the Philips-owned Fontana label, until eventually it set up CBS in Europe. So this Columbia is not that Columbia. This is EMI.

None of the players were known to me before, my ignorance is no excuse. John Scott is currently artistic director of the Hollywood Symphony Orchestra. Tenor player Duncan Lamont is still playing and composing. Harpist composer and conductor David Snell is still composing and producing film scores – recent scores include the soundtrack of  Marvel franchise Deadpool (2016) though I couldn’t hear any harp among the special effects boom bash and biff. Barry Morgan and Arthur Watts careers remain unknown.

At this juncture I need to reveal “Johnny Scott” is not his real name. It is  Patrick John O’Hara Scott, the Johnny invented to sound more jazzy. Patrick is an Irish name, which at least gives him another thing in common (in addition to “Moondance“) with Van Morrison, who is also Irish, and who also altered his name, which was originally George Ivan Morrison. Two perfectly good names, Patrick (Patron Saint of Ireland) and George (Patron Saint of England) unceremoniously dumped following the fickle pied piper of fame.

Sources tell me that another track from Communication is a favourite of a Jazz DJ, Gilles Petersen, (apparently also not his real name, which is Gilles Moehrle) -It is Johnny Scott’s  conga-tastic version of Duke Ellington’s Caravan.

Duke Ellington was not actually a Duke, which is one notch below the King in a monarchy hierarchy. “Duke” Ellington was a mere commoner, Edward Ellington. More than 350 versions of Caravan have been recorded  since its debut in 1936, written by Ellington and Puerto Rican trombonist Juan Tizol, a member of Duke Ellington’s band credited as co-writer of “Caravan”. As far as we know. Or we think we know.

Conga-tastic indeed! says LJC – which as you know is pure invention. I am a fake DJ, using the picture of another fake DJ  from an old BBC comedy sketch show, a character partly based on two other TV comedy fake DJs, Smashy and Nicey, and partly based on the BBC Old Grey Whistle Test presenter “Whispering” Bob Harris, real name Robert Harris, virtually the only real one so far in this story.

Complicated, all this identity business. Truth has long since fallen by the wayside, collateral damage in pursuit of a world more interesting or pliable than the real one. All change, all change, the Mystery Tour stops here, all change…