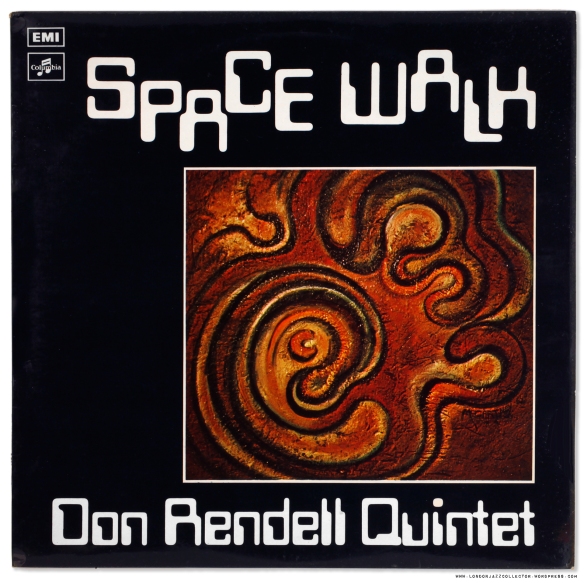 I confess, before shelling out hard-earned cash, I double checked the artist credits to ensure no Norma’s vocals  (Apologies to any Norma fans!) It was only then that I also noticed the absence of Ian Carr and Michael Garrick from the line-up. Stan Robinson? Jack Thorncroft? Peter Shade? This Don Rendell Quintet clearly was not the same animal as the Rendell Carr Quintet, something I should have known, but didn’t.  At the end of the day, I had to  trust Don Rendell to have chosen the right musicians. When the needle hit the vinyl I knew he had, and it is indeed a different animal.

Though the label states ©1972, and the actual recording date, not mentioned in the liner notes, was unexpectedly earlier, December 1970. Strange thing with this album, the tracks are hardly separated, a mere second or two between change, almost continuous. Something different happened here.

The track selection  “Antibes” title is an interesting dedication. Two years previously, at the 1968 Festival de Jazz à Juan/Antibes, first weekend opened with a large slice of the giant death-by-brass Don Ellis Orchestra (three of everything) and a full day of gospel. It was on the second weekend, July 27, 1968, that the Don Rendell Quintet quietly took the stage, the line up featuring both Ian Carr and Michael Garrick.

Running order of the day:

The remaining  three days of the Festival were dominated by the Count Basie Orchestra, and more gospel.

Apart from my sofa, it is hard to imagine a more perfect natural setting to listen to jazz. Bounded by Mediterranean pines, azure blue sea and beyond the bay of Cannes, a clear view to the horizon and the seductive curves of the Massif d’Esterel. The dedication “Antibes” makes sense.

(The Rendell Carr Antibes sessions were subsequently released on CD)

Nowadays the stage of French  “jazz festivals” is filled by expertly-embalmed American pop, soul, hip hop and funk acts like Earth Wind and Fire, not yet extinct jazz-dinosaurs like Herbie Hancock, Chick Corea and John McLaughlin, plus increasingly wrinkled pop stars like Tom Jones and Sting in need of ironing. The Festival’s mission is  to attract a  large local paying audience, who like to clap along to a beat, and want a good evening out. Who is to say that is wrong. Well, perhaps calling it something other than a “Jazz Festival” might put a coin in the honesty box..

The following year, the 1969 Antibes Jazz Festival managed to squeeze in another British Jazz performance, from the Graham Colllier Sextet. And with that, the French flirtation with Le Jazz Rosbif ended abruptly. Brits were dumped.

The three giant figures of British Jazz in the late ’60s, Michael Garrick (piano), Ian Carr (trumpet) and Don Rendell (saxophone, clarinet and flute) were pulling in separate directions, and forming their own line-ups. The original Rendell Carr Quintet fragmented into the Don Rendell Quintet, the Michael Garrick Sextet (feat. Norma Winstone), and Nucleus (feat. Ian Carr). It’s complicated, but stay with me.

When Ian Carr decided to split and  form the jazz-rock band  Nucleus, Don Rendell decided not to replace Carr’s searing trumpet presence with another trumpet. Instead Rendell  brought in tenor saxophonist Stan Robinson, who had been recording with Don on the 1969 Rendell Car Quintet album Change Is (which likewise did not feat. Norma Winstone, vocals).  Robinson, a veteran of the Tubby Hayes Big Band and the Ronnie Ross sextet, was a versatile clarinet, flute and saxophone player, as was Rendell himself. If two flautists was not enough, vibist Peter Shade also played flute. The ingredients had been assembled for Space Walk. Time to cook.

Multiple flutes, clarinets, soprano saxes, a battery of upper register instruments soaring over the lush ringing tones of the vibraphone and sonorus deep bass defines a different sound direction from Rendell’s earlier Lansdowne titles. The three front-line instrumentalists weave layers of serpentine complexity, and it can be difficult to be certain who is playing what, but it is a magic carpet ride, tethered to a tight rhythm section. Bassist Jack Thorncroft is often left in sole custody of the foundations, chord-changes and even melody, striding confidently while everyone else is busy weaving.

These musician’s challenge your natural artist/instrument tracking sense, by swapping instruments on different songs. Rendell may take clarinet or flute or saxophone on one, Stan may move from tenor to clarinet, Shade may take the third flute solo. Despite changing instruments, each player carries over their own vocabulary. Rendell on flute is still Rendell on soprano or clarinet. The whole album positively demands active-listening to catch all the nuances.

It can take a little while for ears schooled on small combo Blue Note to adjust.  No rhythmic piano, no excitable trumpet, few if any swaggering tenor solos, and divorced from  AABA 32 bar formats,  moving from common time to fluid time. It is modal, except when it isn’t.  It swings, but not in the conventional groove of spiritual/soul jazz , more an ethereal aesthetic force, and a defiant War of Independence from the hegemony of American Jazz.

This is British recording and mastering, not working with copy tape from across the pond, like so many UK titles. The Lansdowne series outclass just about everything I have heard, including Decca, and most US production around this time. . Sublime, translucent, simply beautiful, Hi-fi was made for this.

There are a couple of modern reissues of Space Walk, including one “licensed” from the Rendell Estate by an Italian label. As always, “licensed” does not necessarily mean mastered from the original tapes. Legal title contributes nothing to sound quality.  Universal issued a CD of Space Walk at the end of the last century, and  I have seen some RINOs – records in name only – floating around on the internet, including one from a DJ supplies company.

The auction history of Space Walk shows that around only 50 copies have ever come to auction, five or six a year, selling price in the range of £100 to £350 (about $500) Rare, but not impossibly rare, or even insanely rare (as Bob D would say)

Though Jazzman featured five Rendell Lansdowne titles in his magnificent box-set reissue, Space Walk was not among them, perhaps for a reason. The original  was sufficiently desirable for me to raid the piggy bank. I tell myself in such situations, it’s only money, you can’t play money.

Rendell’s most expensive album (aside from Rendell Carr Quintet Shades Of Blue), which qualifies as “insanely rare“, is his 1955 10” Tempo LAP 1, Meet Don Rendell (pictured below), which sells typically for over £1,000 even with scuffs and surface noise. Fewer than twenty copies have ever come to auction, that’s rare.

Don is pictured lounging nonchalantly in a doorway in London’s Mayfair. Mayfair, for any who don’t know it, is currently home to the second ­biggest hedge fund centre in the world, after Wall Street, with more than £200 billion of assets controlled from offices nestling behind ­discreet brass plates, and doorways like that pictured above. Object lesson:

In 1955, Rendell recorded Meet Don Rendell for the Tempo label, owned  by Decca, who were eventually swallowed up by the Universal Music Group.

In 2007, hedge fund Terra Firma purchased EMI for about £4bn GBP ($5.8 billion USD), the largest private equity transaction ever completed in Britain. It proved an utter  total disaster and, facing a crushing amount of debt, EMI was seized by its lenders in 2011 and acquired the following year by … the Universal Music Group.  Small world.

Needless to say, I found the photos of the 1955 Meet Don Rendell album for sale on a Japanese website. Where else?

Thoughtfully, the Japanese site included a readable picture of the liner notes of Meet Don Rendell, which I have sharpened and reproduced here, as it contains a fascinating insider view of the nascent  British Jazz scene of the mid 1950s, and you don’t have to spend a thousand pounds in order to read it. 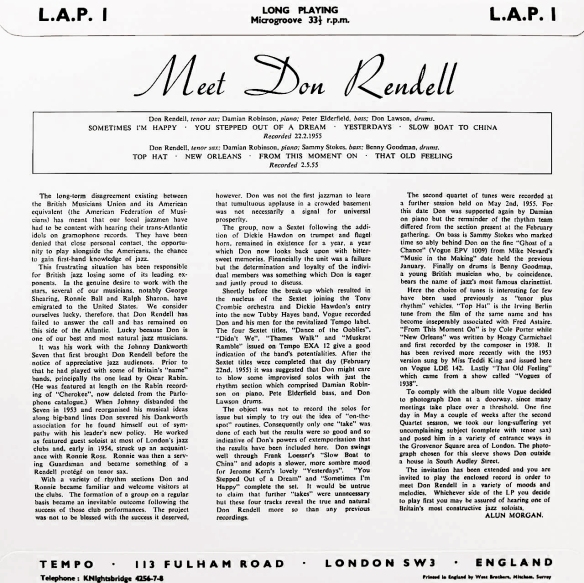 I’ll keep my eye out for any more collectable British Jazz, but that’s about it from me for the moment. Who knows what might be around the corner? (In Central London, probably  a speeding cyclist running a red light up a one way street the wrong way, with a mouthful of expletives if you remind them of the Highway Code).

Any thoughts welcome, as always.

For the latest guide to property offerings in London’s exclusive Holland Park and Mayfair, click here (No, that’s a joke! But in a world of Google Ad-sense tracking everything you read on the net, I for one wouldn’t be at all surprised!)