An experiment, in a novel form of A:B comparison, combined with some big band personnel detective work. In summary, LJC out on a limb, as usual.

Selection: The Girl and The Turk (Boland)

Throughout the 1960s, Belgian pianist Francy Boland (François Boland), based in Cologne, Germany,  led and arranged over 50 recording sessions, with various sizes of groups. Many were produced by Cologne café-owner and jazz godfather Gigi Campi.  It was Europe’s big-band refuge for many American, British, and Scandinavian expatriate jazz musicians.  Each recording session had a core membership of Francy Boland, piano, Kenny Clarke and/or Kenny Clare, drums, and Ellington-veteran Jimmy Woode, bass. The Big Band expanded that trio to twenty or more musicians. The roster of regulars included Sahib Shihab (baritone) Derek Humble (alto) Ronnie Scott, Johnny Griffin and Tony Coe (tenor) and a trio of trombonists, Ake Persson, Nat Peck and Erik Van Lier, with Fats Sadi on  vibes and percussion.

Despite his exotic-sounding name – “Fats” Sadi – full name  Sadi Pol Lallemand was a Belgian musician. He truncated his name to “Sadi” because he disliked his last name, Lallemand,  which perversely means “the German” in French)

A dissection of  Doug Paynes  discography of the Clarke Boland Big Band yields up  the scale and variety of the band’s evolving membership, a bit like that of Art Blakey’s Jazz Messengers, but you could fit the Messengers into a taxi, the CBBB would require a fleet of stretch-limos.

A single table  brings into sharp focus who played what and when, and relevant dates. I made this one myself from the credits on their main recording sessions (not exhaustively or exhaustingly all)

Trumpeters were the most variable selection of artists. Boland drew from a pool of around twenty players, usually at least four per recording session. Most often the favourites were four from Jimmy Deuchar, Idrees Sulieman, Benny Bailey, Dusko Gojkovic and Shake Keane, though many other less well known players occasionally made up the numbers, grateful of finding work.

Amongst the many familiar names of  trumpeters was one less familiar name,  Muvaffak “Maffy” Falay, a Turk, who had studied trumpet at the Ankara Conservatory. The name Mavaffak could easily be confused with Miles Davis term of least-endearment, MoFo, so adopting the more friendly diminutive “Maffy ” seemed a good move.

In another good move, Maffy moved to Europe,  touring  with the Clarke Boland big band in the early 60s. He first appears on a date in late 1961, “Jazz Is Universal“, December 13, 1961, then again on a two day session, January 25-26, 1963, which gave rise to the albums  Now Hear Our Meanin’  and Handle With Care. “Maffy” then disappeared from the roster of Boland Clarke trumpeters, returning just once, in 1967.

Around 1967, Boland song titles began to feature references to a Turkish connection, including  “The Girl and The Turk”, “Turk’s Bolero”, “Turkish Girl”, “The Turk”, and “Young Turks”. Boland song titles were often exotic or cryptic, but none previously made and mention of or reference to a Turkish connection until 1967, starting with this The Girl And The Turk recorded in trio February 19, 1967, followed by a track “Turkish Girl” on an album featuring a section of 21 strings, Flirt and Dream.

After four years absence from the CCBB line up,  Muvaffak “Maffy” Falay reappeared as sole trumpet voice in a Francy Boland Sextet session  recorded in Cologne, September 19, 1967, which gave rise to the “Our Kind Of Strauss” album (which is recommended, no Johan Strauss) . It was Maffy’s last appearance in a Boland line-up.  Two days before The Strauss session, Boland recorded a track “Young Turks” on His Jazz Am Rhein album:

By the Summer of 1968, “Turk” references were everywhere

None of these recordings actually feature Maffy, and each track is credited to Francy Boland as composer. All this could be inconsequential and I was about to give up  on understanding the Turkish Connection when  Boland’s  discography yielded up a connection of potential interest:  On the album featured here, Griff ‘n’ Bags, I think I found the key:

Track (c): “Muvaffak’s Pad“! Not “Maffy’s ipad”, it’s his “pad”, ’60s hipster speak for a “modest transitory dormitory room/s”. Somehow there is a connection between Boland, Maffy’s pad, Maffy, and a Turkish girl or girls.  Who is The Girl and who is The Turk, and why did they so inspire so many songs by this Belgian pianist composer and arranger? Here the trail runs dry… and possibly just as well. Composers generally don’t pluck themes out of thin air, they draw on things that are important to them. At this juncture, the Sunday Newspaper exposé reporter makes an excuse, and leaves.

The Girl And The Turk

“Maffy”  moved to Sweden in the mid ’60s.  He was later  active in the ’70s Jazzhus Montmartre scene, forming a band including Turkish fusion jazz percussionist and drummer Okay Temiz. At least that first name is not going to get him into any trouble.

Unlike calling out “Hey, Muvaffak?”   You talkin’ to me? Wash yo’ mouth! 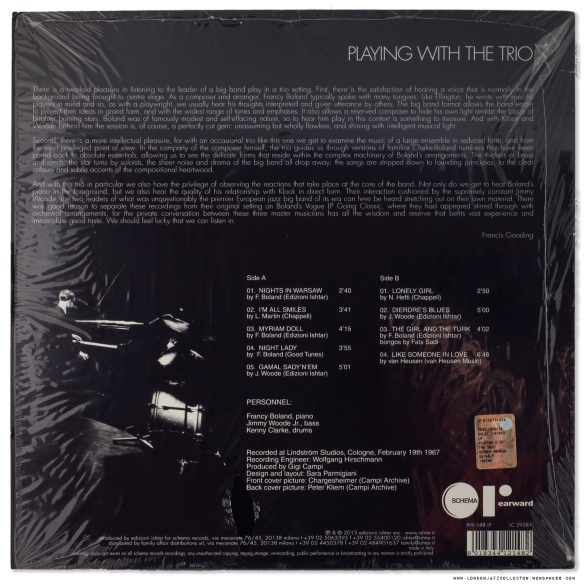 Selection: The Girl and The Turk (Boland)  Clarke-Boland Sextet

I have just fallen in love…with The Girl And The Turk.  It is nominally the same tune as played in the Trio version, but adding a layer of brass:  bari, bone and horn. This is the hidden A:B comparison: the same tune stripped down to its essentials in a trio, and then embellished and arranged with instrumentation by a sextet. The brass harmonies are delicious, swirling and swaying, sashaying even, that’s The Girl. Boland the arranger is master of weaving contrasting-tone harmonies underneath a strong melody, and  his spare, elegant piano solo tiptoes over the top, the composer as soloist.

The piece takes me to the similar place the intoxicating Sun Ra piece,  Enlightenment – Pat Patrick’s  baritone saxophone lead, John Gilmore tenor, Bo Bailey trombone, Hobart Dotson, trumpet, from Jazz In Silhouette (1959) – a tune that once it gets into your head, simply wont leave. Another place I get the same vibe is Mingus’s smoky urban soundscapes,  baritone and trombone with brass.

The budget gatefold tries really hard but fails to match the production quality of Impulse or Music Matters. The back cover is … I despair. Hello, know any graphic designers need some work? 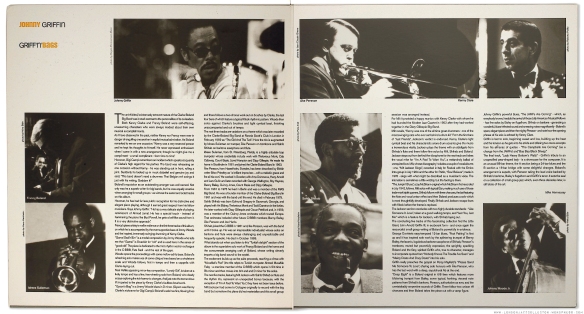 Treasure can be found in many strange and unexpected places. I have found a great amount in the Schema/Rearward reissues of Gigi Campi recordings. The originals, some on German Vogue, are simply ridiculously expensive due to extreme scarcity. Original recording quality  is impeccable. The re-mastering and reissue pressing quality of Schema Rearward is good enough to satisfy this fussy audiophile.

“While Davide Rosa’s and Luciano Cantone’s Schema label has created a contemporary jazz sound with influences from lounge music, soul, electronica and bossa nova, their sublabel Schema Rearward is the place for those seeking a more pure acoustic jazz sound. Emphasis is on re-issues of modern jazz, especially from the sixties.”

Schema’s Rearward sub-label has a large number of Gigi Campi recordings under its belt, including a large catalogue of Boland Clarke records, in both vinyl and CD.

The biggest problem with Francy Boland recordings is filing the bewildering permutation of names. Discogs exposes the problem, including miss-spellings and multi-lingual faux-pas:

Clarke Boland Big Band should be the principal umbrella name, and I’m happy to file the smaller format quintet sextet and octet sessions in the same place. The only divergence is the Sahib Shihab lead titles (Seeds, Summer Dawn,  etc) that are more Sahib than Clarke Boland and Nigel Griffin titles  have some similar issues, you decide.

If you don’t file your records in some alphabetic system order, my office, now! There is a lot of great music here, you need to be able to find it. I’ve got around a years worth of filing to catch up on, stacks of records on the floor. I think I might alphabeticise the pile of records awaiting filing. Or perhaps I’ll set aside a couple of days and do what’s really needed, a complete refresh of the whole collection on the shelves.